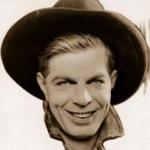 Hoot Gibson was born in Tekamah, Nebraska, USA. He was an American film actor, director, and producer. His role in several films include: Pride of the Range, His Only Son, The Ring of Destiny, A Knight of the Range, The Golden Bullet, A Woman in the Web, The Black Horse Bandit, Ace High, The Jack of Hearts, West Is Best, The Stranger, Sweet Revenge, Bandits Beware, The Lone Hand, The Thrill Chaser, The Saddle Hawk, The Texas Streak, The Mounted Stranger, Cowboy Counsellor, Lucky Terror, Arizona Whirlwind, and The Marshal's Daughter. He produced several films include: The Sawdust Trail, Ride for Your Life, The Thrill Chaser, Trailing Trouble, Burning the Wind, The Mounted Stranger, Trigger Tricks, Roaring Ranch, and The Concentratin' Kid. He directed film, The Smilin' Kid.