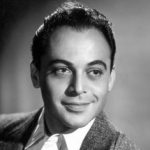 Herbert Lom was born in Prague, Czech Republic. He was a Czech-born British film and television actor. He is best known for his roles in The Ladykillers and The Pink Panther film series. His role in several films include: The Young Mr Pitt, Night Boat to Dublin, Dual Alibi, Good-Time Girl, State Secret, The Ringer, Star of India, War and Peace, Action of the Tiger, The Roots of Heaven, The Big Fisherman, Mysterious Island, El Cid, Gambit, Eve, 99 Women, Dark Places, The Lady Vanishes, King Solomon's Mines, Going Bananas, and Ten Little Indians. His role in television include: The Horse Without a Head, The Human Jungle, and Lace. He wrote two historical novels, including Enter a Spy and Dr. Guillotin.