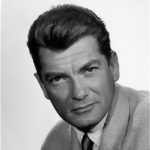 Jean-Alfred Villain-Marais, also known as Jean Marais was born in Cherbourg, France. He was a French actor and sculptor. He performed in over 100 films and was the muse of acclaimed director Jean Cocteau. His role in several films include: Le Scandale, The new Men, Carmen, Beauty and the Beast, Le Secret de Mayerling, Julietta, Napoléon, Elena and Her Men, Typhoon Over Nagasaki, Girl in His Pocket, Austerlitz, The Miracle of the Wolves, The Mysteries of Paris, Fantômas, The Pariah, Parking, Les Misérables, and Stealing Beauty. In 1963, he was a member of the jury at the 3rd Moscow International Film Festival. He performed on stage until his eighties, also working as a sculptor. His sculpture "Le passe muraille" can be seen in the Montmartre Quarter of Paris. In 1985, he was the head of the jury at the 35th Berlin International Film Festival. In 1996, he was awarded the French Legion of Honor for his contributions to French Cinema.