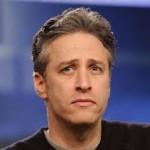 Jon Stewart was born in New York City, New York, USA. He is an American comedian, screenwriter, film director, political commentator, actor, producer and television host. He is best known for being the host of The Daily Show (also writer), a satirical news program on Comedy Central, from 1999 to 2015. The Daily Show won 22 Primetime Emmy Awards. He earned a BA degree in Psychology from College of William and Mary in Virginia in 1984. He started as a stand-up comedian, but branched into television as host of Short Attention Span Theater for Comedy Central. He went on to host his own show on MTV, The Jon Stewart Show, and then hosted You Wrote It, You Watch It, also on MTV. He hosted the 78th and 80th Academy Awards. His role in several films include: Wishful Thinking, Half Baked, Playing by Heart, Death to Smoochy, and Batman v Superman: Dawn of Justice. His role in television include: Since You've Been Gone (TV film), The Colbert Report (News satire and Talk show, also co-creator and executive producer), and Important Things with Demetri Martin (sketch-variety show, executive producer). He directed only one film, Rosewater (also producer and writer). He is the co-author of America (The Book): A Citizen's Guide to Democracy Inaction, and Earth (The Book): A Visitor's Guide to the Human Race.