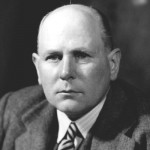 James Evershed Agate was born in Pendleton, Greater Manchester, England. He was an English diarist and critic. In the period between the wars, he was one of Britain's most influential theatre critics. After working in his father's business until his late twenties he found his way into journalism, being on the staff of The Manchester Guardian; drama critic for The Saturday Review, and The Sunday Times, and holding the same post for the BBC. He wrote several books include: A shorter ego, L. of C, Around cinemas, The selective Ego, More first nights, Playgoing, At half-past eight, Immoment Toys, First Nights, The amazing theatre, and Rachel.