I. A. Richards Quotes

Showing all quotes
I. A. Richards (2) 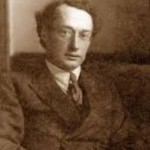 Ivor Armstrong Richards, known as I. A. Richards was born in Sandbach, Cheshire, England. He was an English professor, literary critic, poet and rhetorician whose work contributed to the foundations of the New Criticism, a formalist movement in literary theory, which emphasized the close reading of a literary text, especially poetry, in an effort to discover how a work of literature functions as a self-contained, self-referential æsthetic object. He was educated at Clifton College and Magdalene College, Cambridge. He served as a lecturer at Magdalene College, Cambridge University from 1922-29, as a professor at Tsinghua University from 1929-30, as a professor at Harvard University from 1944-63. He wrote several books include:  Foundations of Aesthetics (with C. K. Ogden and James Wood), The Meaning of Meaning (with C. K. Ogden), Principles of Literary Criticism, Science and Poetry, Practical Criticism, Philosophy of Rhetoric, Goodbye Earth(poetry), The Screens(poetry), and Internal Colloquies(poetry).