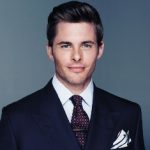 James Marsden was born in Stillwater, Oklahoma, USA. He is an American actor. He studied broadcast journalism from Oklahoma State University. He began his acting career guest-starring in television shows Saved by the Bell: The New Class, Touched by an Angel, and Party of Five. His role in several films include: Public Enemies, Campfire Tales, Disturbing Behavior, Gossip, X-Men, X2, Heights, The Alibi, Superman Returns, Hairspray, Enchanted, 27 Dresses, Death at a Funeral, Straw Dogs, Bachelorette, The Butler, Walk of Shame, The Best of Me, The D Train, Accidental Love, Unfinished Business, and Henchmen. His role in television include: Boogies Diner(Sitcom), Second Noah(TV drama), On the Edge of Innocence(TV film), Ally McBeal(TV series), 30 Rock(Sitcom), and Westworld(TV series).