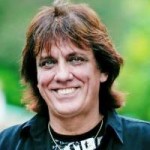 Jonathan James "Jon" English was born in Hampstead, London, England. He was an English-born Australian singer, songwriter, musician and actor. He was an early vocalist and rhythm guitarist for Sebastian Hardie. He was also a noted solo singer; his Australian top twenty hit singles include "Hollywood Seven", "Words are Not Enough", "Six Ribbons", and "Hot Town". His role in several films include: Touch and Go, and Walk the Talk. His role in television include: Against the Wind (miniseries, Won the TV Week Logie Award for ' Best New Talent in Australia'), All Together Now (TV series), and Time Trackers (TV series). His albums list shown below: Wine Dark Sea, It's All a Game, Hollywood Seven, Minutes to Midnight, Words Are Not Enough, Calm Before the Storm, In Roads, Jokers and Queens (with Marcia Hines), Some People..., Dark Horses, and Busking.