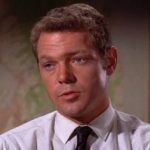 James Gordon MacArthur was born in Los Angeles, California, USA. He was an American actor best known for the role of Danny "Danno" Williams, the reliable second-in-command of the fictional Hawaiian State Police squad in the long-running television series Hawaii Five-O. He was the adopted son of playwright Charles MacArthur, and his wife, actress Helen Hayes. His role in several films include: The Young Stranger, The Light in the Forest, Third Man on the Mountain, Kidnapped, Spencer's Mountain, The Truth About Spring, The Bedford Incident, Battle of the Bulge, Hang 'Em High, and The Love-Ins. His role in television include: The Eleventh Hour, The Great Adventure, and Time Express.