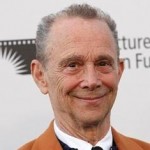 Joel Grey was born in Cleveland, Ohio, USA. He is an American actor, singer, dancer, and photographer. He originated the role of George M. Cohan in the musical George M! in 1973, and the Wizard of Oz in the musical Wicked. He also starred as Moonface Martin in the Broadway revivals of Anything Goes and as Amos Hart in Chicago. He originated the role of the Master of Ceremonies in the Broadway musical Cabaret in 1966 for which he won a Tony Award. He is a photographer; his first book of photographs, Pictures I Had to Take, was published in 2003. His role in several films include: Come September, Cabaret (Won- Academy Award for Best Supporting Actor in 1973, BAFTA Award for Best Newcomer, Golden Globe Award for Best Supporting Actor in 1973), Man on a Swing, Remo Williams: The Adventure Begins, Kafka, The Music of Chance, The Empty Mirror, The Fantasticks, Dancer in the Dark, and Choke. His role in television include: A Christmas Carol, Lawman (TV series), and Brooklyn Bridge (TV series). He married to Jo Wilder in 1958. They have two children.