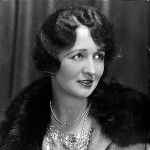 Hedda Hopper was born in Hollidaysburg, Pennsylvania, USA. She was an American actress and gossip columnist. She had been a moderately successful actress of stage and screen for years before being offered the chance to write the column Hedda Hopper's Hollywood for the Los Angeles Times in 1938. She began acting in silent movies in 1915. Her motion picture debut was in The Battle of Hearts with William Farnum. She appeared in more than 120 movies over the following twenty-three years, usually portraying society women. Her role in several films include: Nearly Married, The New York Idea, Sherlock Holmes, Women Men Marry, Happiness, Zander the Great, The Caveman, Children of Divorce, Adam and Evil, Love and Learn, Runaway Girls, Half Marriage, Holiday, The Common Law, Pilgrimage, Dracula's Daughter, Topper, Tarzan's Revenge, The Women, Life with Henry, and Reap the Wild Wind.