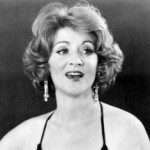 Patricia Neal known professionally as Fannie Flagg was born in Birmingham, Alabama, USA. She is an American actress, comedian, novelist, and screenwriter. She is best known as a semi-regular panelist on the 1973–82 versions of the game show Match Game, and for the 1988 novel Fried Green Tomatoes at the Whistle Stop Cafe, which was adapted into the 1991 movie Fried Green Tomatoes. She was nominated for an Academy Award for the screenplay adaptation. She has written several novels include: Coming Attractions, Welcome to the world, Baby Girl!, Standing in the rainbow, A Redbird Christmas, Can't Wait to Get to Heaven, I Still Dream about You, The All-Girl Filling Station's Last Reunion, and Daisy Fay and the Miracle Man. Her role in several films include: Five Easy Pieces, Stay Hungry, Rabbit Test, Grease, My Best Friend Is a Vampire, and Crazy in Alabama.