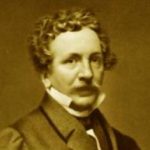 George Payne Rainsford James was born in London, England. He was an English novelist and historical writer. He was for many years British Consul at various places in the United States and on the Continent. He held the honorary office of British Historiographer Royal during the last years of William IV's reign. He developed a love of languages, including Greek, Latin, Persian and Arabic. He wrote several novels include: Richelieu: A Tale of France, The String of Pearls, The Desultory Man, The Gentleman of the Old School, Morley Ernstein, Arabella Stuart, The Smuggler, Ticonderoga, Prince Life, The Old Dominion, The Old Oak Chest, and The Cavalier. His historical works is shown below: The History of Chivalry, The History of Charlemagne, Memoirs of Celebrated Women, and Dark Scenes of History.