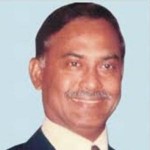 Ziaur Rahman, Bir Uttam, was a Bangladeshi politician and an army officer, who pronounced the Declaration of Independence of Bangladesh on March 26, 1971 at Kalurghat, Chittagong, on behalf of Sheikh Mujibur Rahman. He later became the seventh President of Bangladesh from 1977 until 1981. A highly decorated and accomplished military officer, he retired from the Bangladesh Army as a Lieutenant General.[1] He was commander of sector 1, transferred to teldhala in May 1971. He organised and created Sector 11 and remained its commander. During August 1971, He was appointed Brigade Commander of the Bangladesh Forces during the Bangladesh war of independence with Pakistan. During his administration, he first founded JAGODAL but he himself did not become a member of it. Then he founded the Bangladesh Nationalist Party (BNP), one of the two largest political parties in the country. He is popularly known as Shaheed President Zia, meaning martyred Zia, in reference to his 1981 assassination.
Ziaur Rahman, commissioned military officer by career, attained the rank of Lieutenant General before retiring and then assuming the office of the presidency of Bangladesh. During the Indo-Pakistani War of 1965, Zia served in the Khemkaran sector in Punjab as the commander of a Pakistani company unit of 300–500 soldiers. The sector was the scene of the most intense battles between the rival armies. The Pakistani government awarded Zia's unit with the highest numbers of gallantry awards for heroic performances during the war. Ziaur Rahman himself won the distinguished and prestigious Hilal-e-Jurat medal, and his unit won 2 Sitara-e-Jurat medals and 9 Tamgha-e-Jurat medals from the Army for their brave roles in the 1965 War with India.