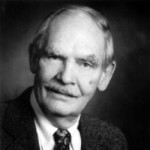 Frederik George Pohl, Jr. was born in Brooklyn, New York City, New York, USA. He was an American novelist, science fiction writer, editor, essayist, and publisher. From about 1959 until 1969, he edited Galaxy and its sister magazine If; the latter won three successive annual Hugo Awards as the year's best professional magazine. His 1977 novel Gateway won four "year's best novel" awards. He won the Hugo Award for Best Fan Writer in 2010, for his blog, "The Way the Future Blogs". He wrote several novels include: Gateway, Man Plus, Beyond the Blue Event Horizon, Jem, The Merchants' War, A Plague of Pythons, The Cool War, Homegoing, Chernobyl, Black Star Rising, Stopping at Slowyear, and Starburst.