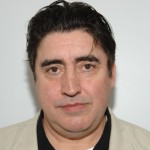 Alfred Molina is a British actor of Spanish and Italian descent. He is well known for his roles in Raiders of the Lost Ark, Prick Up Your Ears, The Man Who Knew Too Little, Spider Man 2, Maverick, Species, Not Without My Daughter, Chocolat, Frida, Steamboy, The Hoax, Prince of Persia: The Sands of Time, The Da Vinci Code, Little Traitor, An Education and The Sorcerer's Apprentice. In 2007, Molina narrated a 17 part original audiobook for Audible.com called The Chopin Manuscript. This serialized novel was written by a team of 15 best-selling thriller writers, including Jeffery Deaver, Lee Child, Joseph Finder and Lisa Scottoline.