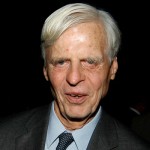 George Ames Plimpton was born in New York City, New York, USA. He was an American journalist, author, literary editor, actor, and occasional amateur sportsman. He is widely known for his sports writing and for helping to found The Paris Review. After graduating from Harvard, he attended King's College at Cambridge University in England. He studied there from 1950–52 and graduated with third class honors, BA in English. His role in several films include: The Detective, Rio Lobo, If Ever I See You Again, Volunteers, A Fool and His Money, Little Man Tate, Good Will Hunting, The Last Days of Disco, and Just Visiting. He wrote several books include: Paper Lion, The bogey man(humour), Out of my league, Open net, Shadow box, Mad ducks and bears, Truman Capote( biography), The Best of Plimpton(biography), The curious case of Sidd Finch(novel), The Writer's Chapbook(book editor), George Plimpton on Sports, Playwrights at Work(book editor), The X factor, The Paris Review(book editor), Ernest Shackleton, The rabbit's umbrella, One More July, and A sports bestiary.