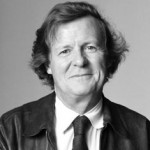 David Hare was born in St Leonards-on-Sea, Hastings, East Sussex, UK. He is an English playwright, screenwriter, theatre  director and film director. In the West End, he had his greatest success with the plays Plenty, which he adapted into a film starring Meryl Streep in 1985, Racing Demon, Skylight, and Amy's View. He wrote screenplays for the film Wetherby and the BBC drama Page Eight. As of 2013, Hare has received two Academy Award nominations, three Golden Globe Award nominations, three Tony Award nominations and has won a BAFTA Award, a Writers Guild of America Award for Best Adapted Screenplay and two Laurence Olivier Awards. He was educated at Lancing College, an independent school in West Sussex, and at Jesus College, Cambridge.