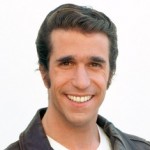 Henry Franklin Winkler was born in Manhattan, New York City, New York, USA. He is an American actor, film director, comedian, TV producer and author. He is best known for his role as Arthur Fonzarelli in the 1970s American sitcom Happy Days. He also starred as Sy Mittleman on Adult Swim's Childrens Hospital and starred as Eddie R. Lawson on USA Networks's Royal Pains. In 1967, he received his B.A. degree from Emerson College. In 1970, he earned an M.F.A. degree from the Yale School of Drama. He has received an honorary D.H.L. degree from Austin College. His role in several films include: Crazy Joe, Heroes, Night Shift, The Waterboy, Holes, Click, A Plumm Summer, and Here Comes the Boom. He directed several films include: Memories of Me and Cop and a Half. He produced several TV series include: MacGyver and Dead Man's Gun. He has written several books with Lin Oliver include: Niagara Falls, or Does It?, I Got a "D" in Salami, Day of the Iguana,  The Zippity Zinger, and Bookmarks Are People Too!.