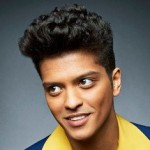 Bruno Mars was born in Honolulu, Hawaii. He is an American singer, songwriter, record producer, voice actor, and choreographer. He graduated from high school and moved to Los Angeles to pursue a musical career. Mars produced songs for other artists, co-founding the production team The Smeezingtons. His debut studio album, Doo-Wops & Hooligans, was anchored by the U.S. Billboard Hot 100 chart-topping singles "Just the Way You Are" and "Grenade", as well as the number-five single "The Lazy Song". His second album, Unorthodox Jukebox, was released in 2012, peaked at number one in the United States. Mars has received many awards and nominations, including two Grammy Awards and was named one of Time Magazine's 100 most influential people in the world, in 2011. In 2014, he was named "Artist of the Year" by Billboard and ranked number one on the Forbes 30 under 30 list. Throughout his singing career, he has sold over 11 million albums and 68 million singles, making him one of the world's best-selling artists of all time. However, as a performer, writer and producer his total sales surpass 130 million singles.