I turned down 'Some Like It Hot.' See how smart I am? I felt I couldn't bring anything funny to it. The outfit was funny. I don't need to compete with the wardrobe. 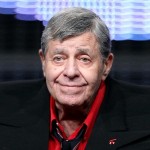