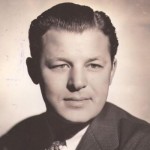 John Elmer "Jack" Carson was born in Carman, Manitoba, Canada. He was a Canadian film actor. He was one of the most popular character actors during the "golden age of Hollywood", with a film career spanning the 1930s, 1940s, and 1950s. His role in several films include: Stage Door, High Flyers, Carefree, Destry Rides Again, Lucky Partners, Love Crazy, Wings for the Eagle, Mildred Pierce, April Showers, My Dream Is Yours, The Good Humor Man, A Star Is Born, The Bottom of the Bottle, The Tarnished Angels, The Bramble Bush, and The Big Bankroll.