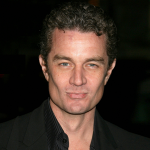 James Wesley Marsters was born in Greenville, California, USA. He is an American actor and musician. He studied at the Pacific Conservatory of the Performing Arts in Santa Maria, California. His role in several films include: House on Haunted Hill, Chance, Shadow Puppets, Superman: Doomsday, P.S. I Love You, Dragonball Evolution, and Dragon Warriors. His role in television include: Buffy the Vampire Slayer(TV series), Angel(TV series), Cool Money(TV film), Smallville(TV series), Moonshot(TV film), High Plains Invaders(TV film), Hawaii Five-0(TV series), and Runaways (TV series). In 2003–04, he was the lead singer for the rock band Ghost of the Robot. His albums list shown below: Mad Brilliant, Civilized Man, Like a Waterfall, B-Sider, and Murphy's Law.