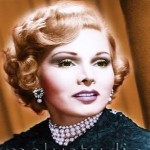 Zsa Zsa Gabor is a Hungarian-born American stage, film and television actress.
Born in Budapest, her birth name was Sári Gábor. She is the middle of three daughters born to Vilmos Gábor, a soldier, and Jolie Gábor. Gabor was named after Sári Fedák, a popular Hungarian actress. Her elder sister Magda was a socialite and her younger sister Eva was an actress and businesswoman.
a Swiss boarding school, Zsa Zsa Gabor was discovered by the tenor Richard Tauber on a trip to Vienna in 1936 and was invited to sing the soubrette role in his new operetta, Der singende Traum ("The Singing Dream") at the Theater an der Wien, her first stage appearance. Author Gerold Frank, who helped Gabor write her autobiography in 1960, describes his impressions of her while the book was being written.
She acted on stage in Vienna, Austria, in 1932, and was crowned Miss Hungary in 1936. She emigrated to the United States in 1941 and became a sought-after actress with "European flair and style", with a personality that "exuded charm and grace". Her first movie role was as supporting actress in Lovely to Look At. She later acted in We're Not Married! and played one of her few leading roles in Moulin Rouge (1952), directed by John Huston, who described her as a "creditable" actress. Besides her film and television appearances, she is best known for having nine husbands, including hotel magnate Conrad Hilton and actor George Sanders. She once stated, "Men have always liked me and I have always liked men. But I like a mannish man, a man who knows how to talk to and treat a woman—not just a man with muscles."