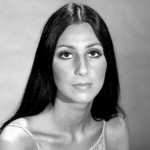 Cherilyn Sarkisian, professionally known as Cher, is an American singer, songwriter, actress, model, fashion designer, television host, comedian, dancer, businesswoman, philanthropist, author, producer, film director, and record producer. She began her solo career simultaneously, releasing in 1966 her first million-seller song, "Bang Bang". While working on television, she established herself as a solo artist with the number-one singles "Gypsys, Tramps & Thieves", "Half-Breed", and "Dark Lady". In the early 1980s, Cher made her Broadway debut, and then starred in the film Silkwood, as Dolly Pelliker, and her performance earned her a nomination for the Academy Award for Best Supporting Actress in 1983. She made her directorial debut in the 1996 film If These Walls Could Talk. Cher's first studio album in 12 years, Closer to the Truth, became her highest-charting solo album in the U.S. to date. She has won an Academy Award, a Grammy Award, an Emmy Award, a special CFDA Fashion Award, three Golden Globe Awards, and a Cannes Film Festival award, among several other honors. She has sold 150 million records worldwide,