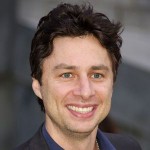 Zachary I. "Zach" Braff is an American actor, screenwriter, producer, comedian, and director. Braff first became known in 2001 for his role as Dr. John Dorian on the television series Scrubs, for which he was nominated for an Emmy Award and three Golden Globe Awards.
In 2004, Braff made his directorial debut with Garden State. Braff returned to his home state New Jersey to shoot the film, which was produced for $2.5 million. The film made over $35 million at the box office and was praised by critics. Braff wrote the film, starred in it, and compiled the soundtrack record. He won numerous awards for his directing work, and also won the Grammy Award for Best Soundtrack Album in 2005.
Braff was born in South Orange, New Jersey. His mother, Anne Brodzinsky, is a clinical psychologist, and his father, Harold Irwin "Hal" Braff, is a trial attorney and sociology professor. His parents divorced and re-married others during Braff's childhood. One of his siblings, Joshua, is an author. Braff's father was born Jewish, and Braff's mother, originally a Protestant, converted to Judaism before marrying his father. Braff was raised in Conservative Judaism, and has said that he is "not a huge organized religion guy". He has wanted to be a filmmaker since his early childhood, and has described it as his "life dream."
Braff was diagnosed with obsessive-compulsive disorder at age ten. He graduated from Columbia High School, in Maplewood, New Jersey, where he worked in the school's television station along with fellow classmate and singer/actress Lauryn Hill.