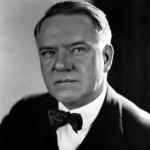 William Claude Dukenfield, better known as W. C. Fields, was an American comedian, actor, juggler and writer. Fields was known for his comic persona as a misanthropic and hard-drinking egotist who remained a sympathetic character despite his snarling contempt for dogs, children and women.
Claude Dukenfield worked at the Strawbridge and Clothier department store and in an oyster house, before he left home at age 18. At age 15, he had begun performing a juggling act at church and theater shows, and entered vaudeville as a "tramp juggler" using the name W. C. Fields. He soon was traveling as "The Eccentric Juggler", and included amusing asides and increasing amounts of comedy into his act, becoming a headliner in North America and Europe. In 1906 he made his Broadway debut in a musical comedy, The Ham Tree.
The characterization he portrayed in films and on radio was so strong it became generally identified with Fields himself. It was maintained by the movie-studio publicity departments at Fields's studios  and further established by Robert Lewis Taylor's 1949 biography W.C. Fields, His Follies and Fortunes. Beginning in 1973, with the publication of Fields's letters, photos, and personal notes in grandson Ronald Fields's book W.C. Fields by Himself, it has been shown that Fields was married, and he financially supported their son and loved his grandchildren.
However, Madge Evans, a friend and actress, told a visitor in 1972 that Fields so deeply resented intrusions on his privacy by curious tourists walking up the driveway to his Los Angeles home that he would hide in the shrubs by his house and fire BB pellets at the trespassers' legs. Several years later Groucho Marx told a similar story on his live performance album, An Evening with Groucho.