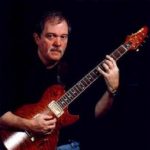 John Laird Abercrombie was born in Port Chester, New York, USA. He was an American jazz guitarist and composer. He attended Berklee College of Music from 1962 to 1966 and studied under famed guitar educator Jack Petersen. He graduated from Berklee in 1967 and then attended North Texas State University. He was known for his spare, understated and eclectic style and his work with organ trios. His albums list shown below: Timeless, Sargasso Sea (with Ralph Towner), Characters, Straight Flight, Abercrombie Quartet, Five Years Later (with Ralph Towner), Night, Solar (with John Scofield), Current Events, Getting There, Animato, While We're Young, November, Speak of the Devil, Where We Were, Open Land, Class Trip, Structures, The Third Quartet, Within a Song, 39 Steps, The First Quartet, A Nice Idea (with Andy LaVerne), and Timeline (with Andy LaVerne).