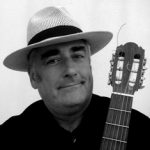 Jeremy Webster "Fred" Frith was born in Heathfield, Sussex, England. He is an English composer, guitarist, and professor. Probably best known for his guitar work, he first came to attention as one of the founding members of the English avant-rock group Henry Cow. He was also a member of Art Bears, Massacre and Skeleton Crew. He has also composed several long works, including Traffic Continues and Freedom in Fragments. Frith's career spans over four decades and he appears on over 400 albums. Currently he is Professor of Composition in the Music Department at Mills College in Oakland, California. His albums list shown below: Gravity, Guitar Solos, Cheap at Half the Price, Speechless, The Technology of Tears, Eye to Ear, To Sail, to Sail, Freedom in Fragments, Clearing Customs, and Impur.