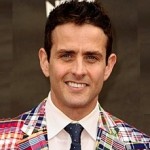 Joseph Mulrey McIntyre, known professionally as Joey or Joe McIntyre was born in Needham, Massachusetts, USA. He is an American singer and actor. He is best known as the youngest member of the boy band New Kids on the Block. He graduated from Catholic Memorial School in West Roxbury, Massachusetts. His role in several films include: The Fantasticks, Tony 'n' Tina's Wedding, On Broadway, New Year's Eve, and The Heat. His albums (New Kids On The Block) list shown below: New Kids on the Block, The Block, Hangin' Tough, Step by Step, Face the Music, Greatest Hits, The Block, and 10. His solo albums list shown below: Stay the Same (singles: "Stay the Same", "I Love You Came Too Late", "I Cried"), Meet Joe Mac (single: "Rain"), 8:09 (single: "L.A. Blue"), Talk to Me, and Here We Go Again (single: "Here We Go Again").