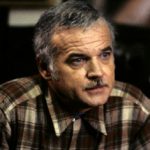 Marvin John Nance, known professionally as Jack Nance and occasionally credited as John Nance was born in Boston, Massachusetts, USA. He was an American actor. He was known for his work with director David Lynch, particularly for his roles in Eraserhead, Blue Velvet, and Twin Peaks. His role in several films include: Breaker! Breaker!, Hammett, Dune, City Heat, Barfly, Wild at Heart, The Hot Spot, Whore, Motorama, Meatballs 4, The Secret Agent Club, Little Witches, and Lost Highway.