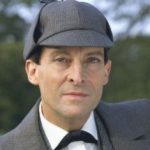 Jeremy Brett was born in Berkswell, Warwickshire, England. He was an English actor, best known for playing fictional detective Sherlock Holmes in four Granada TV series from 1984 to 1994. He educated at Eton College. His role in several films include: War and Peace, The Wild and the Willing, The Very Edge, Girl in the Headlines, My Fair Lady, Act of Reprisal, The Medusa Touch, Mad Dogs and Englishmen, and Moll Flanders. His role in several television films include: The Ghost Sonata, The Prodigal Daughter, Madame X, The Good Soldier, Florence Nightingale, Deceptions, The Sign of Four, and The Hound of the Baskervilles.