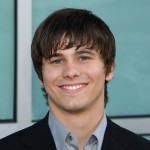 Jason Morgan Ritter was born in Los Angeles, California, USA. He is an American actor. He is the son of actress Nancy Morgan and actor John Ritter. His role in several films include: Mumford, Swimfan, Happy Endings, The Wicker Man, The Deal, W., The Perfect Age of Rock 'n' Roll, The Dry Land, The Perfect Family, Free Samples, The Big Ask, The End of Love, Hits, About Alex, 7 Minutes, The Meddler, and Carrie Pilby. His role in television include: Joan of Arcadia(TV fantasy), The Class(TV series), WWII in HD(TV series), The Event(TV series), Us & Them(TV series), Another Period(sitcom), and The Gospel of Kevin(TV fantasy).