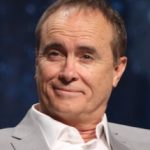 Jeffrey Alan Combs was born in Oxnard, California, USA. He is an American actor known for his horror film roles such as Re-Animator and appearances playing a number of characters in the Star Trek and the DC Animated Universe television franchises. He attended Santa Maria's Pacific Conservatory of the Performing Arts, and later developed his acting skills in the Professional Actor's Training Program at the University of Washington. His role in several films include: Honky Tonk Freeway, Frightmare, Cyclone, Robot Jox, Necronomicon, Castle Freak, The Frighteners, Caught Up, House on Haunted Hill, FeardotCom, Satanic, The Wizard of Gore, Parasomnia, Dark House, Would You Rather, and Suburban Gothic. His role in television include: Justice League Unlimited (TV series), The 4400 (TV series), and Transformers: Prime (TV series).