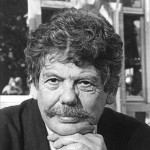 Janwillem van de Wetering was born in Rotterdam, Netherlands. He was a Dutch crime novelist and short story writer. He wrote several novels include: Outsider in Amsterdam, Tumbleweed, The Corpse on the Dike, Death of a Hawker, The Blond Baboon, The Maine Massacre, The Streetbird, The Rattle-Rat, Hard Rain, Just a Corpse at Twilight, The Hollow-eyed Angel, The Japanese corpse, The butterfly hunter, Seesaw millions, and The Perfidious Parrot. He wrote several short stories include: Inspector Saito's Small Satori, The Sergeant's Cat and Other Stories, Mangrove Mama and Other Tropical Tales of Terror, and The Amsterdam Cops: Collected Stories. He was awarded the French Grand Prix de Littérature Policière in 1984.