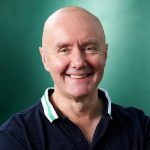 Irvine Welsh was born in Leith, Edinburgh, Scotland. He is a Scottish novelist, playwright, short story writer and screenwriter. He gained a degree in computer science and studied for an MBA at Heriot Watt University. He has written several novels include: Trainspotting, Marabou Stork Nightmares, Filth, Glue, Porno, The Bedroom Secrets of the Master Chefs, Crime, Skagboys, The Sex Lives of Siamese Twins, A Decent Ride, and The Blade Artist. His Short story collections, including The Acid House, Ecstasy, If You Liked School You'll Love Work, and Reheated Cabbage. He has written play, including You'll Have Had Your Hole. He has written several films include:  The Acid House, Dockers, and Filth. He directed documentary film, The New Ten Commandments.