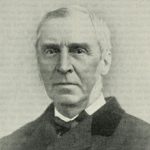 James Anthony Froude was born in Dartington, Devon, England. He was an English historian, novelist, biographer, and editor of Fraser's Magazine. He studied at Oriel College, Oxford. He was elected a fellow of Exeter College. He thereafter made his living by his pen until in 1892 he returned to Oxford as regius professor of modern history. He wrote several books include: Shadows of the clouds, The Nemesis of Faith(novel), Essays in literature & history, Calvinism, Gems from Froude, Thomas Carlyle, The Knights Templars, Life and letters of Erasmus, Luther, Lord Beaconsfield, and The Reign of Mary Tudor.