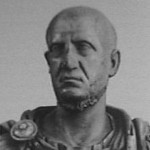 Tacitus was born in 56 or 57 to an equestrian family; like many Latin authors of both the Golden and Silver Ages, he was from the provinces, probably in northern Italy or Gallia Narbonensis. The exact place and date of his birth are not known, and his praenomen is also unknown; in the letters of Sidonius Apollinaris his name is Gaius, but in the major surviving manuscript of his work his name is given as Publius. One scholar's suggestion of Sextus has gained no traction.
Tacitus' dedication to Fabius Iustus in the Dialogus may indicate a connection with Spain, and his friendship with Pliny suggests that he was born in northern Italy. No evidence exists however that Pliny's friends from northern Italy knew Tacitus, nor do Pliny's letters hint that the two men had a common background. Pliny Book 9, Letter 23 reports that when he was asked if he was Italian or provincial, he gave an unclear answer, and so was asked if he was Tacitus or Pliny. Since Pliny was from Italy, some infer that Tacitus was from the provinces, probably Gallia Narbonensis. His ancestry, his skill in oratory, and his sympathetic depiction of barbarians who resisted Roman rule (e.g., Ann. 2.9), have led some to suggest that he was a Celt. This belief stems from the fact that that the Celts occupied Gaul prior to the Roman invasion and were famous for their skill in oratory, and had been subjugated by Rome.
The Annals and the Histories, published separately, were meant to form a single edition of thirty books. Although Tacitus wrote the Histories before the Annals, the events in the Annals precede the Histories; together they form a continuous narrative from the death of Augustus (14) to the death of Domitian (96). Though most has been lost, what remains is an invaluable record of the era. The first half of the Annals survived in a single copy of a manuscript from Corvey Abbey, and the second half from a single copy of a manuscript from Monte Cassino, and so it is remarkable that they survived at all. Tacitus wrote three minor works. Agricola, a biography of his father-in-law Gnaeus Julius Agricola; the Germania, a monograph on the lands and tribes of barbarian Germania; and the Dialogus, a dialogue on the art of rhetoric. Tacitus's writings are known for their dense prose that seldom glosses the facts, in contrast to the style of some of his contemporaries, such as Plutarch. When he writes about a near-defeat of the Roman army in Ann. I, 63 he does so with brevity of description rather than embellishment.