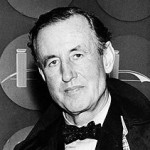 Ian Lancaster Fleming was born in Mayfair, London, England. He was an English novelist, journalist and naval intelligence officer who is best known for his James Bond series of spy novels. He studied at the University of Munich and the University of Geneva. He wrote several novels include: Casino Royale, Live and Let Die, Moonraker, Diamonds Are Forever, From Russia, with Love, Dr. No, Goldfinger, Thunderball, The Spy Who Loved Me, On Her Majesty's Secret Service, You Only Live Twice, and The Man with the Golden Gun. He wrote other books include: The Diamond Smugglers(non-fiction), For Your Eyes Only (short story collection), Thrilling Cities, Chitty-Chitty-Bang-Bang(children's novel), and Octopussy and The Living Daylights. In 2008, The Times ranked Fleming 14th on its list of "The 50 greatest British writers since 1945".