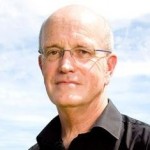 Iain Sinclair was born in Cardiff, Wales. He is a Welsh writer and documentary filmmaker. Much of his work is rooted in London, most recently within the influences of psychogeography. He educated at Trinity College, Dublin. He attended the Courtauld Institute of Art and the London School of Film Technique. He was elected a Fellow of the Royal Society of Literature in 2009. He directed several documentary films include: The Falconer(also screenwriter) and London Orbital(also screenwriter). He has written several books include: The Birth Rug(poetry), Lud Heat(prose and poetry), Suicide Bridge(novel), Significant wreckage(poetry), Downriver(novel- won the James Tait Black Memorial Prize and the 1992 Encore Award), Radon Daughters(novel), Lights out for the territory, Slow Chocolate Autopsy(novel), Liquid City, Rodinsky's Room(with Rachel Lichtenstein), Landor's Tower(novel), London Orbital, Dining on Stones(novel), Edge of the orison, and American Smoke.