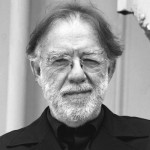 Godfrey Reggio was born in New Orleans, Louisiana, USA. He is an American documentary filmmaker. He co-founded La Clinica de la Gente, a facility that provided medical care to 12,000 community members in Santa Fe. In 1963 he co-founded Young Citizens for Action, a community organization project that aided juveniles among the street gangs in Santa Fe. In 1972, he co-founded the Institute for Regional Education in Santa Fe, a non-profit foundation focused on media development, the arts, community organization, and research. He directed, produced, and written several documentary films include: Koyaanisqatsi, Powaqqatsi, Anima Mundi(not produced), Naqoyqatsi, and Visitors.