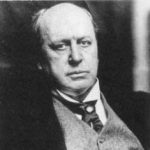 Henry James was born in New York City, New York, USA. He was an American novelist and writer. He is regarded as one of the key figures of 19th-century literary realism. He is best known for a number of novels showing Americans encountering Europe and Europeans. He wrote several novels include: Roderick Hudson, The American, The Europeans, Watch and Ward, Washington Square, The Portrait of a Lady, The Bostonians, The Reverberator, The Princess Casamassima, The Tragic Muse, The Spoils of Poynton, The Other House, What Maisie Knew, The Awkward Age, The Sacred Fount, The Wings of the Dove, The Ambassadors, The Golden Bowl, The Sense of the Past, and The Outcry. He wrote several novellas include: Madame de Mauves, The Aspern Papers, In the Cage, and The Beast in the Jungle. He wrote several short stories include: The Figure in the Carpet, The Middle Years, The Jolly Corner, and Brooksmith.