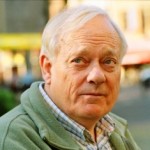 James Hamilton-Paterson was born in London, England. He is an English author, novelist and poet. He educated at Windlesham House, Sussex, King's School, Canterbury and Exeter College, Oxford. He earned his first break in 1969 as a reporter for New Statesman until 1974 when he became features editor for Nova magazine. His Non-fiction works include: A very personal war, Mummies, Playing with Water, Three Miles Down, Seven-Tenths, America's Boy, Empire of the Clouds, and Marked for Death. He has written several novels include: Gerontius(Won- Whitbread Award), The Bell Boy, Griefwork, Ghosts of Manila, Cooking with Fernet Branca, Amazing Disgrace, and Under the Radar. He has written several poems include: Option Three and Dutch Alps. His Children's fiction works include: Flight Underground and The House in the Waves.