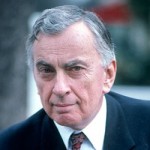 Gore Vidal was born in West Point, New York, USA. He was an American actor, author, essayist, novelist, playwright, politician, and screenwriter. His political and cultural essays were published in The Nation, the New Statesman, the New York Review of Books, and Esquire magazines. His role in several films include: Bob Roberts, With Honors, Shadow Conspiracy, Gattaca, and Shrink. He wrote Non-fiction include: Sex, Death and Money, Vidal in Venice, Sexually Speaking, Dreaming War, Inventing a Nation, and Imperial America. He wrote several essays include: Reflections Upon a Sinking Ship, The Second American Revolution, Armageddon?, Screening History, United States: Essays 1952-1992, The Last Empire: Essays 1992-2000. He wrote several novels include: Williwaw, The City and the Pillar, Dark Green, Bright Red, Messiah, Julian, Myra Breckinridge, Burr, Myron, 1876, Kalki, Creation, Duluth, Lincoln, Empire, Hollywood, Live from Golgotha, The Smithsonian Institution, and The Golden Age. He wrote several plays include: Visit to a Small Planet, The Best Man, Weekend, and An Evening with Richard Nixon. In 1960, he was the Democratic candidate for Congress, for the 29th Congressional District of New York State, a usually Republican district on the Hudson River, but lost the election to the Republican candidate J. Ernest Wharton, by a margin of 57 percent to 43 percent. He wrote several films include: The Catered Affair, I Accuse!, The Scapegoat, Suddenly, Last Summer, The Best Man, Is Paris Burning?, Last of the Mobile Hot Shots, and The Palermo Connection.