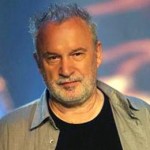 Giovanni Giorgio Moroder was born in Urtijëi, South Tyrol, Italy. He is an Italian singer, songwriter, composer, DJ, and record producer. He is frequently credited with pioneering Italo disco and electronic dance music. He produced singles for Donna Summer during the late-1970s disco era, including "Bad Girls", "Last Dance", "Love to Love You Baby", "No More Tears, "Dim All the Lights", "MacArthur Park", "Hot Stuff", "On the Radio", and "I Feel Love". He also composed the soundtrack for the film Midnight Express, which won an Academy Award and contained the international hit "Chase". He has stated that the work of which he is most proud is Berlin's "Take My Breath Away". This song and "Flashdance... What a Feeling" earned him the Academy Award for Best Original Song in 1986 and 1983.