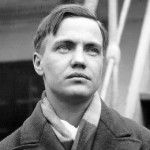 George Antheil was born in Trenton, New Jersey, United States. He was an American composer, pianist, writer, and inventor. In 1941 he developed a radio guidance system for Allied torpedoes with actress Hedy Lamarr that used a code to synchronise random frequencies, referred to as frequency hopping, with a receiver and transmitter. This technique, which is now known as spread spectrum, is now widely used in telecommunications. This work led to them being inducted into the National Inventors Hall of Fame in 2014. He wrote over 300 musical works in all major genres, including symphonies, chamber works, film music, and operas. He was extremely outspoken and articulate, and wrote numerous articles, as well as an autobiography, Bad Boy of Music. He wrote crime novel, Death In the Dark.