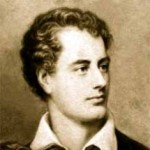 George Gordon Byron was born in London, England. He, commonly known simply as Lord Byron, was an English poet and a leading figure in the Romantic movement. Among his best-known works are the lengthy narrative poems Don Juan and Childe Harold's Pilgrimage, and the short lyric "She Walks in Beauty". He studied at Trinity College, Cambridge University, in 1805. He wrote several poetry books include: Hours of Idleness, The Giaour, The Bride of Abydos, The Corsair, Lara, The Prisoner of Chillon, Manfred, Mazeppa, The Vision of Judgment, Beppo, and The Siege of Corinth. He was member of the  House of Lords in 1809.