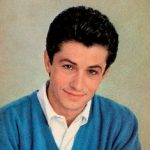 George Chakiris was born in Norwood, Ohio, USA. He is an American dancer, singer, and actor. His biggest success came with the 1961 film West Side Story, for which he won the Academy Award for Best Supporting Actor for his role as Bernardo, leader of the "Sharks". He studied at the American School of Dance. He appeared as a dancer in 1954 White Christmas. He can also be seen in the funeral dance in the MGM musical film Brigadoon. His role in several films include: West Side Story, The Young Girls of Rochefort, Kings of the Sun, 633 Squadron, Bebo's Girl, The Big Cube, Flight from Ashiya, Diamond Head, Two and Two Make Six, The Mona Lisa Has Been Stolen, and Hot Line. His albums list shown below: The Gershwin Songbook, Easily Stop Time, Broken Colour, Famous Hits by George Chakiris, Leisure Time, Explore, George Chakiris: A Taste of Honey, and Days To Come.