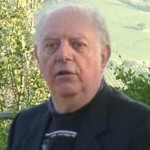 Dario Fo was born in Leggiuno Sangiano, Varese, Italy. He is an Italian actor, playwright, comedian, composer, singer, theatre director, songwriter, and political campaigner. "Arguably the most widely performed contemporary playwright in world theatre", much of his dramatic work depends on improvisation and comprises the recovery of "illegitimate" forms of theatre, such as those performed by giullari and, more famously, the ancient Italian style of commedia dell'arte. His work of the 1960s, 1970s and 1980s is peppered with criticisms of assassinations, corruption, organised crime, racism, Roman Catholic theology and war. His receipt of the 1997 Nobel Prize in Literature marked the "international acknowledgment of Fo as a major figure in twentieth-century world theatre".