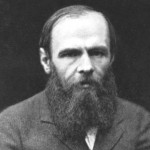 Fyodor Mikhailovich Dostoyevsky was born in Moscow, Russia. He was a Russian novelist, short story writer, essayist, journalist, and philosopher. Dostoyevsky's literary works explore human psychology in the troubled political, social, and spiritual atmosphere of 19th-century Russia, and engage with a variety of philosophical and religious themes. In the following years, he worked as a journalist, publishing and editing several magazines of his own and later A Writer's Diary, a collection of his writings. He wrote several novels include: Poor Folk, Crime and Punishment, The Idiot, Demons, The Brothers Karamazov, Notes from Underground, Humiliated and Insulted, The Grand Inquisitor, and The Village of Stepanchikovo. He wrote several short stories include: White Nights, A Gentle Creature, A Christmas Tree and a Wedding, The Peasant Marey, and A Nasty Story.